Humans move and we watch them from our own moving position. We rarely physically experience another person’s body movements through actual human contact, apart from those closest to us – hugging, holding, leaning into and lying up against. Or do we? I am interested in the once removed physical interactions we have through touch, when we are recipient to another persons movements via some kind of interface – object, material…. These interfaces (stuff that two or more people are in physical contact with at the same time) – tables, chairs, flooring can exaggerate and heighten or diffuser and softener our direct experiences of others physical movements.

The other day I was in my favourite café sat at their large table, the kind you might find in a kitchen in an old farmhouse, where families gather for meals and conversation. I believe the idea of the café owner Anneka is to make the environment feel homely having a number of people sat around the same table, so that we might be encouraged to communicate with one another – not something that is promoted in your average café – where small segregated tables and uncomfortable chairs inhibit interaction with other café dwellers. I enjoy this ‘all round the table’ arrangement as you often end up sitting close to others and yet you can still retain your own personal space, a closeness that is comforting but not imposing or confrontational. The table is a bit wobbly, so depending on whom else is sat around it, the table moves in response to each occupant’s body movements. It is usually when two or more people sit down together that the table becomes animated and vibrates the most, as a result of their interactive movements while they talk to each other. When I feel these vibrations and tremors from where I am sat, I indirectly become part of their conversation, sandwiched between the two talking bodies, as the movement is right with me in my arms connected via the table and my iPad as I write. The table’s shifting activity is unique to the individual generating them, and mirrors the conversation they are having, the emotional delivery of their words, the gestures that go with their sentences which are expressed through the actions of their upper body that is connected to the table – hands and arms colliding with the wooden structure, synchronised to the staccato of projected words.

On this particular day I recall vividly this experience, as the table was vibrating more than usual. A woman at the other end of the table was getting incredibly animated, and was expressing herself physically as well as verbally. I was also able to listen to parts of the conversation and became aware that the vibration I was receiving through my wooden transmitter was more exaggerated than the words being spoken. What I mean is that the table was being shuddered, shacked and banged more dramatically than what I understood of the words being spoken, it was as if this individual found it more affective to communicate through their body actions and gestures than with words and sentences. Perhaps they were compensating for their limited and restrained capacity of verbal language, and the body with fewer inhibitions was stepping in to express what they really felt!

The thing is, after getting over the initial annoyance of my computer bouncing around as it leant against the tabletop edge, I started to ‘go with’ the table’s movement….. really trying to connect to this persons language through this particular material engagement (table – wood behavior). It was as if I was actually touching this total stranger, and connecting with them personally. It made me think about whether I, who was sat at the other end of the table, understood the conversations better than the person they were talking to, that I understood the intentionality behind the words being spoken. The direct recipient of the conversation was listening to what that person was saying and may or may not have acknowledged the moving table, whereas I was feeling and listening to the table’s movements, (human body clashing with wood) foremost with the verbal conversation as secondary to my experience.

What is interesting about this is whether our bodily movements express more honestly and perhaps more directly than our use of language when we communicate with one another. Maybe the body is less likely to want or be able to restrain and disguise how we feel, whereas our use of constructed words and sentences we are more in control of. Or is our bodily actions a direct expression of what we are saying and therefore it is futile to separate body and language?

It is important to pay attention to how others physically move when we are talking and listening to them, as this can reveal more than what is being verbally communicated. I also wonder in a world where we rarely physically touch others – strangers (unless of course you are in the industry of touching – masseur, dentist, doctor etc.) that the mediated touch is something we should engage with more, the vibrating apparatus when two strangers are holding/touching at the same time – handrail on a bus, table in a cafe, arm rest on a train…. Also the importance of communicating in ‘real’ physical space, apposed to email, Snapchat, Facebook, phone…. To be able to read the physical and visual signals while we communicate with one another, those subtle body expressions that can reveal so much more than words alone. Humans are sociable animals and need human contact. I’m sure the reason why I like to sit around the large table in my favourite café (apart from the fact they make the best coffee) even when I don’t speak to my neighbour, is that it fulfils a need ‘to feel/touch’ others, mediated touch, actual touch or just visual touch.

For more on Material Engagements go to Tenderfoot 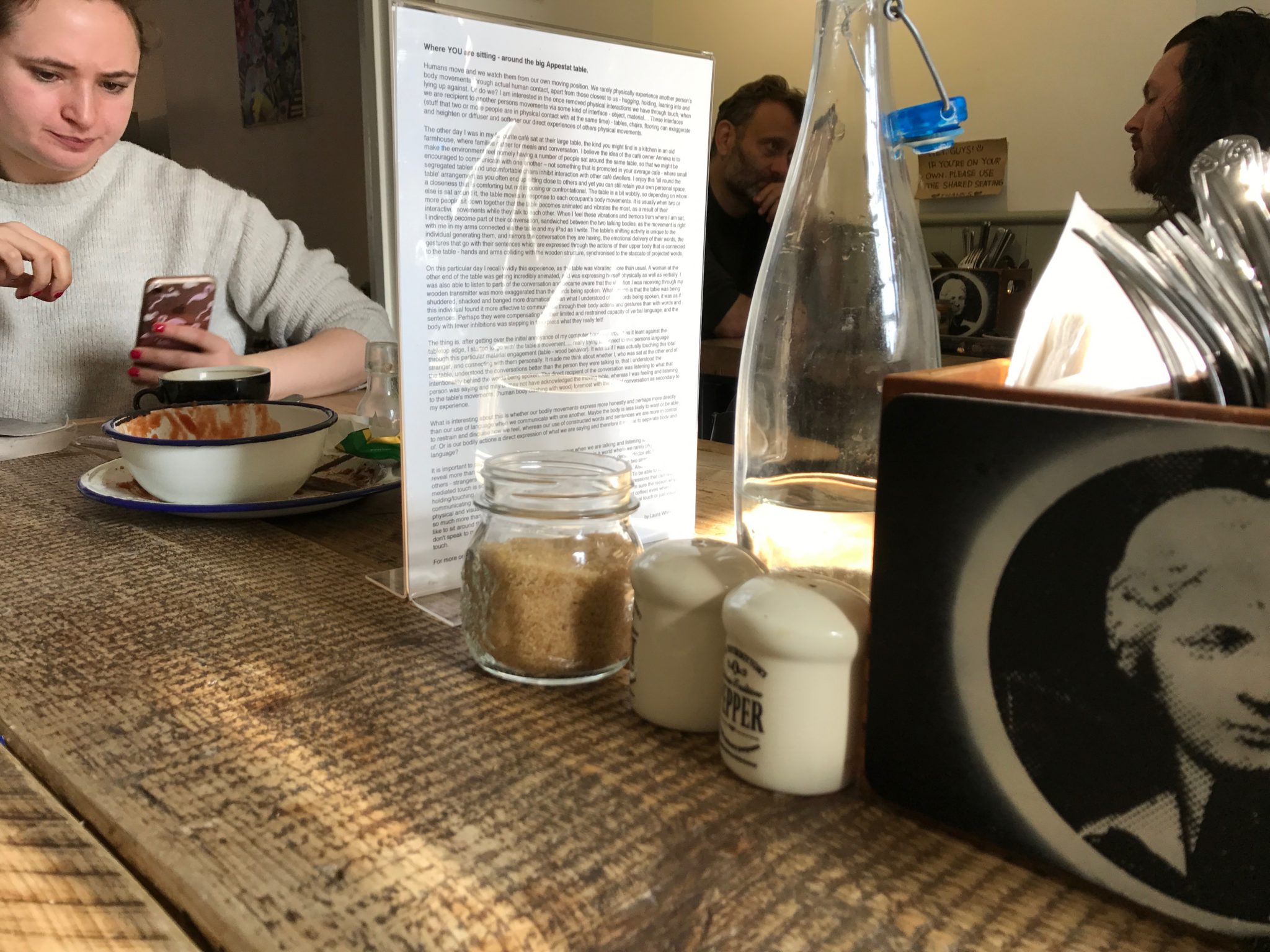 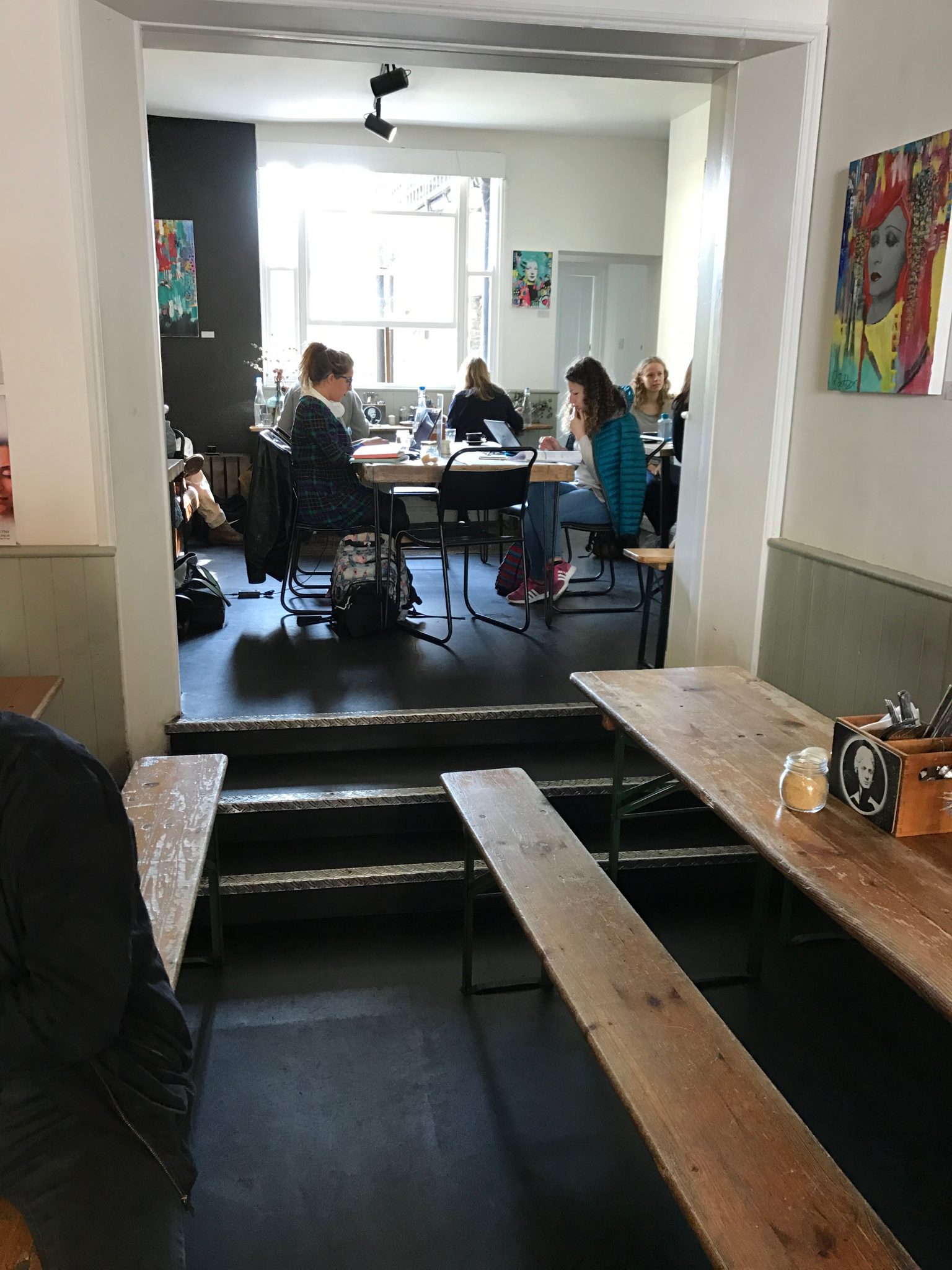 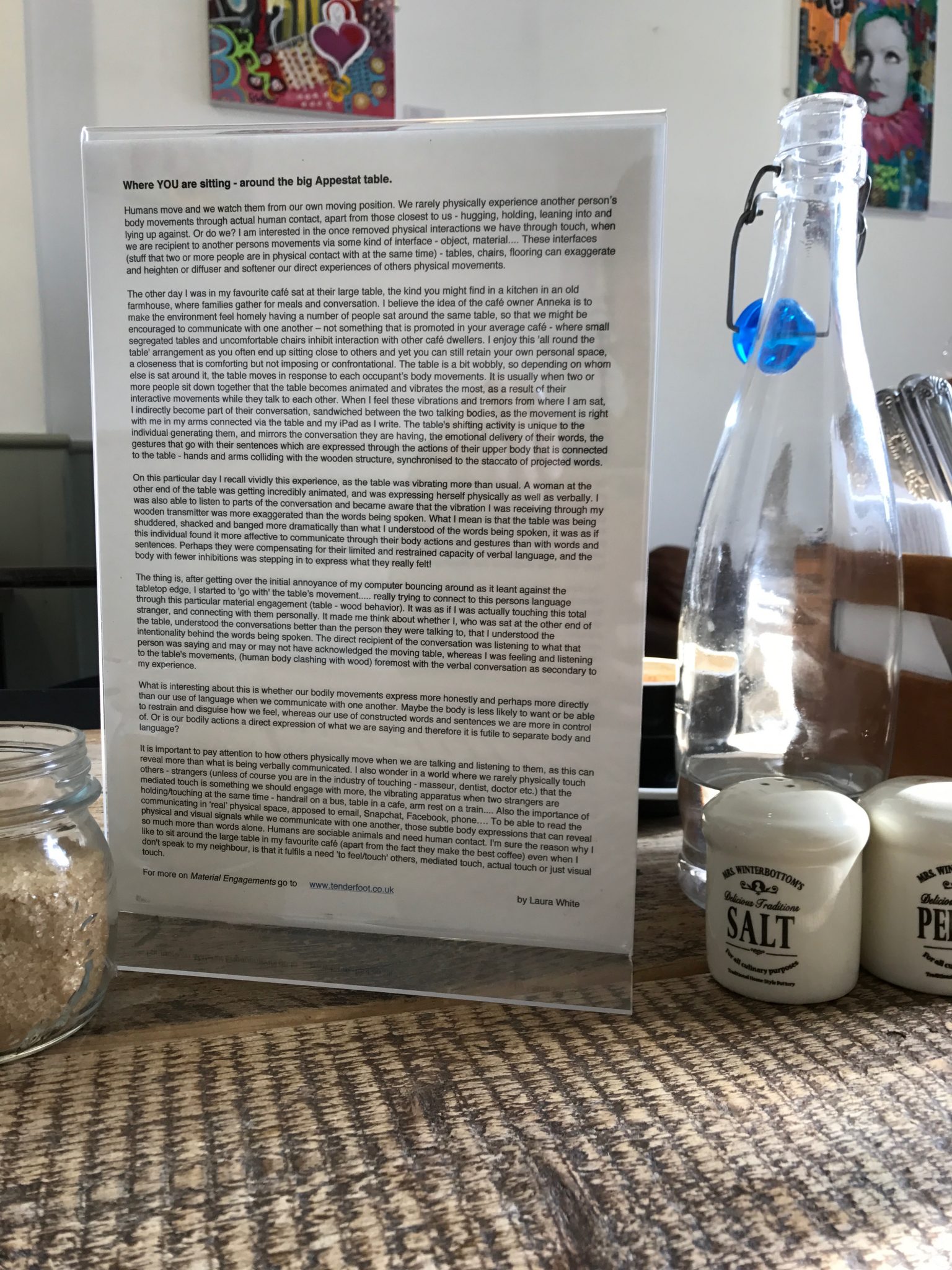