I was in a restaurant a few days ago having lunch with my partner Mark. I was sat with my back to the wall facing into the center of the room where a few steps ascend from the bar and kitchen space into the main seating-eating area. It is a smart place, a French bistro where the waiters wear tightly wrapped long aprons and are constantly checking everything is satisfactory with your meal – which can be a bit much sometimes – I’m not overly keen on having my glass constantly topped up with wine – never having the chance to get to the bottom of a single measure until the end of the bottle!

As we finished our meal we both looked up suddenly in response to a loud crash, to see one of the waiters hurtle across the room, tray in one hand heading towards the floor at high speed. He had tripped up on one of the stairs and dived forward landing on one knee, his other leg lurching forward to block a full fall. The contents of the coffee cups on the tray lifted up out of their containers and headed downwards to splash and disperse across the floor in slow motion. I know this sounds like a cliché – but it really does feel that time slows down when you witness an incident like this, because you can see the event unfold in front of you but are powerless to intervene in time to prevent the unfortunate outcome. It is as if it takes time for the viewers’ eyes and brain to engage the rest of their body (legs to move, activating torso and arms in an attempt to rush forward and catch the falling waiter and his load), so all you can do is watch like an audience trapped in theatre seats. The waiter amazingly managed to keep the tray upright, and although he maintained control over the tray and to a certain extent the cups and saucers on top, only loosing one of the three, he had no control over the fluid contained in the cups, so the milk and coffee of all three vessels lifted out and headed for the floor, splaying out into a multitude of energetic arc shaped crowns as the substances exploded on impact with the floor.

This dramatic event, of which I had a front seat, displayed a number of material actions and reactions. The different weights and consistencies of the material the waiter was carrying reacted distinctively. The tray at the base held directly by the waiter was the most stable material and the item the handler had the most control of, then the cups and saucers above – one resting on the other with their own potential slippage and then inside these cups the hot unpredictable liquid that moved with the slightest exertion. So from the bottom upward the stack of materials was increasingly vulnerable when subjected to such rapid motion – as being dropped as the waiter fell. The contents of the coffee swept across the floor in the direction of the forward plunging waiter. It becomes clear when observing any liquid spill which direction the action was generated by the shape of the splatter. Looking at the aftermath on the floor I became the forensic scientist deciphering a murder case. Which direction did the killer attack their victim – where did the attacker approach from to cause the blood splatter on the floor… was he attacked from behind or taken by surprise from the side…

A hush fell across the restaurant as the single cup, contents of all three cups and waiter crashed to the floor. Also, as the waiter fell he knocked the table and chairs in front of him – creating a cacophony of jarring noises – ceramics meeting wooden floor, wooden table and chair legs dragged across wooden floor, human body protected by fabric colliding with wooden floor and liquid splashing onto wooden floor and surrounding wooden furniture. I wanted to applaud the waiter for his performance and achievement to hang onto the tray and three remaining cups and saucers, but no one else appeared to want to join in so I refrained and just quietly told the very embarrassed waiter when I left what a fantastic spectacle his fall had been and that I hoped he was ok. I could see that the restaurant manager was annoyed with him, whereas his colleagues where supportive, ‘taking the piss’ out of him in order to lift his spirits. The next few minutes that followed I watched the clean up procedure – two waiters wiping, mopping and brushing up the aftermath while the fallen waiter stood back to recompose. He seemed quite shaken up, from both the fall and the immanent reprimand he was anticipating from his manager at the end of his shift.

The table and surrounding chairs where this spilt liquid had shot underneath was swiftly moved to one side, a waiter came out with reams of blue disposable toweling dropping it on top of the liquid to absorb the majority of the spill, then a waiter with a brush and pan magically appeared sweeping up the broken ceramics, followed by a broom and bucket to mop up the remaining liquid, and then followed by more blue paper to dry and polish the floor. No more than five minutes had passed from the opening fall, and table and chairs were back in position and service was elegantly resumed. It was a magnificent cover up – as if nothing had happened – as if a restaurant of this caliber could never make such a blunder! But if the forensics had returned traces of milky coffee would have been detected travelling between the herring bone parquet flooring, droplets hidden on the legs of the table and chairs and minute fibers from the cotton apron of the fallen waiter wedged between the grains of the wood floor. 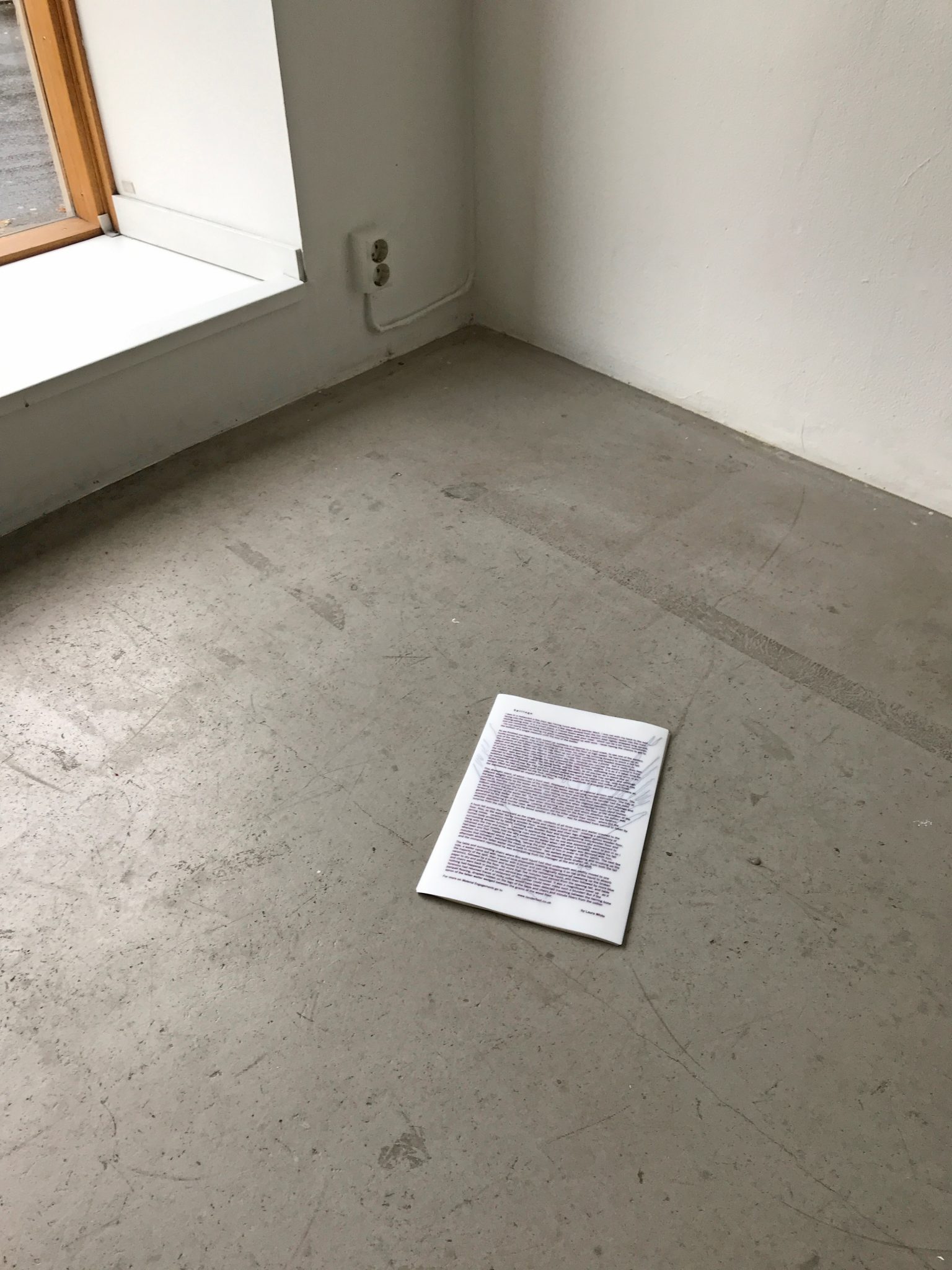 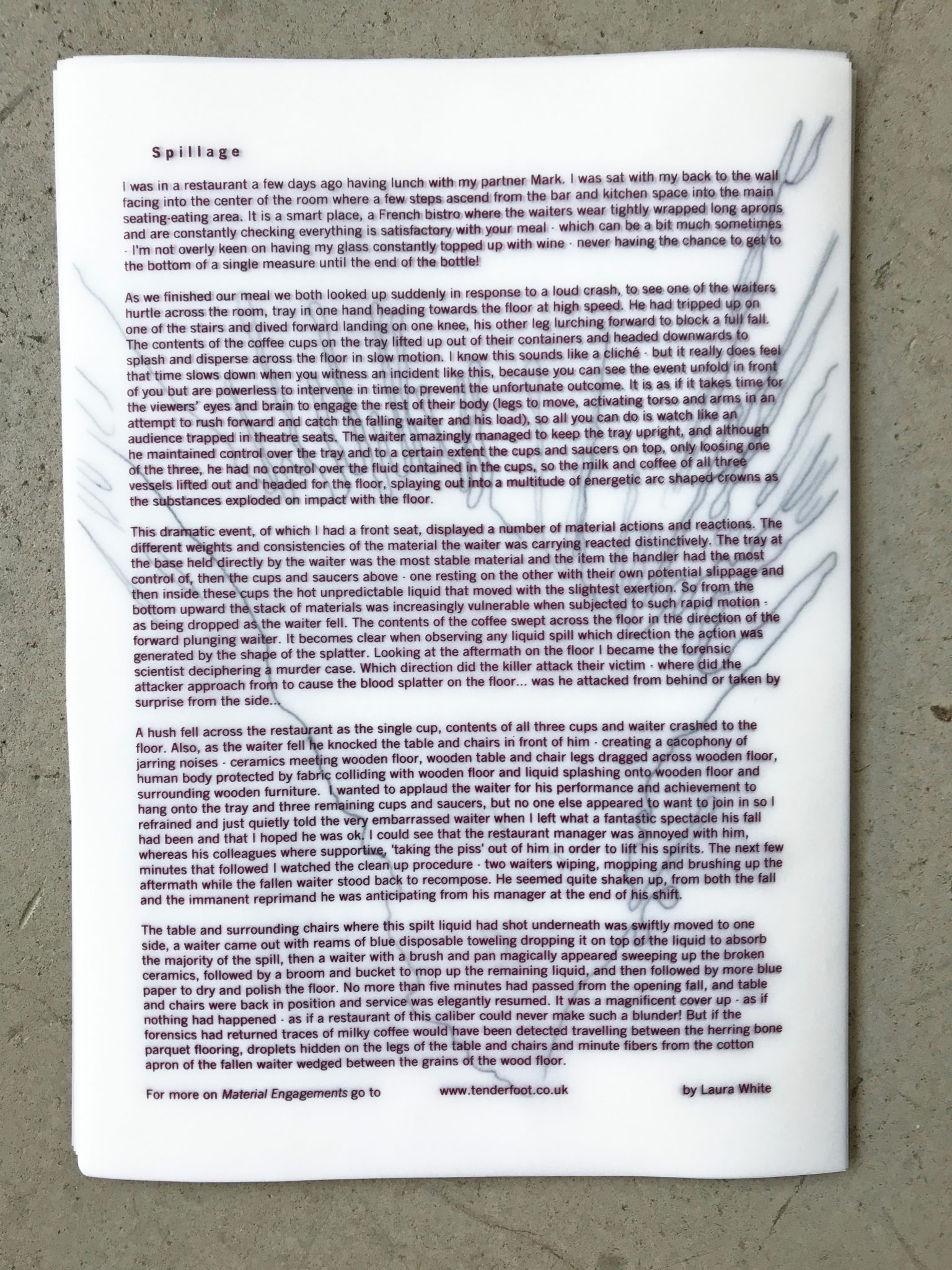 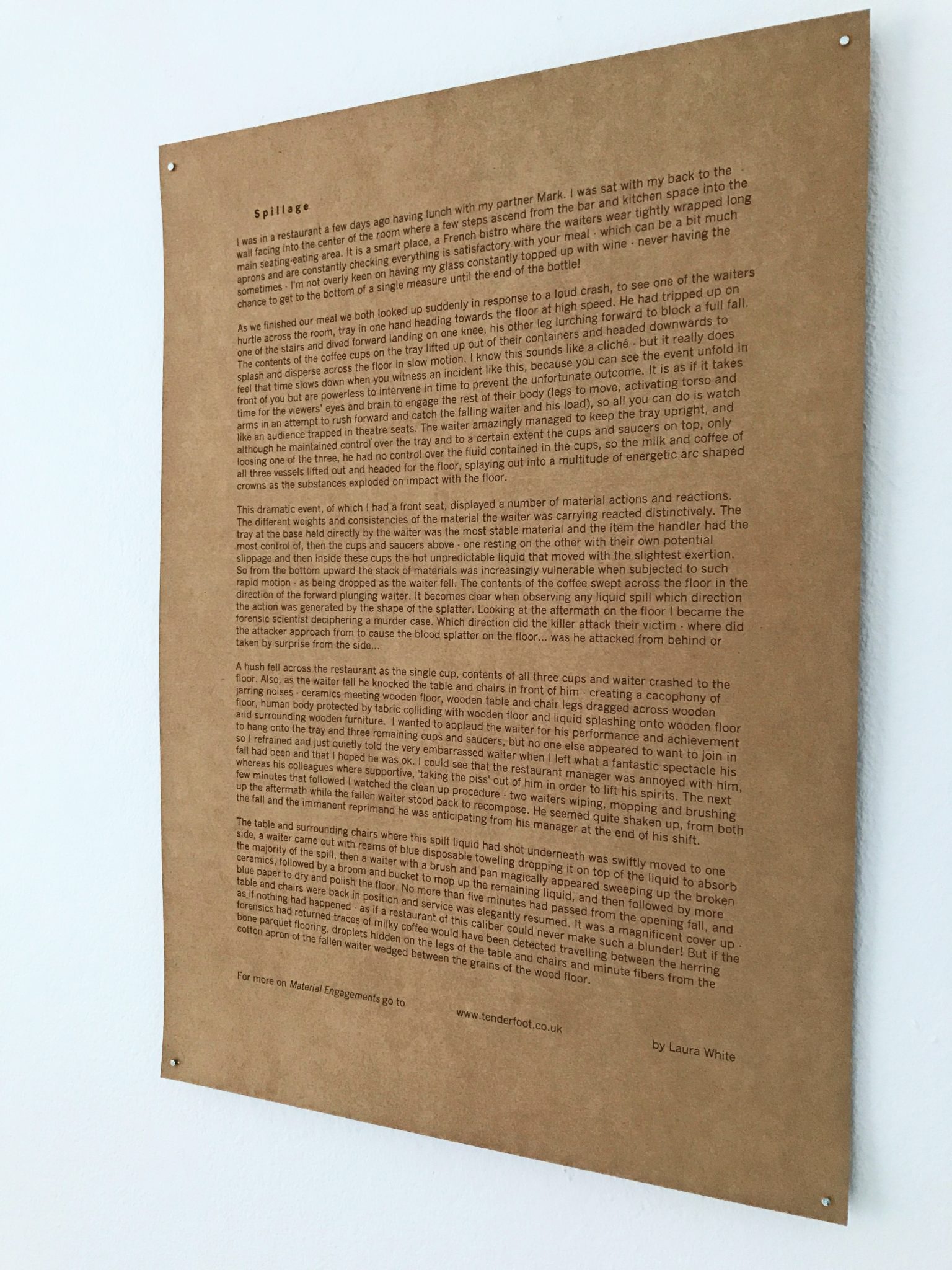